Know Your Instruments: The Flute.

How well do you know the history of the flute?

The flute is the oldest woodwind instrument, dating to 900 B.C. or earlier. The first likely flute was called the “ch-ie” and emerged in China.

Early flutes were played in two different positions: vertically, like a recorder, or horizontally, in what was called the transverse position. The transverse flute first arrived in Europe with traders from the Byzantine Empire during the Middle Ages and flowered in Germany, so much so that it became known as the German flute. 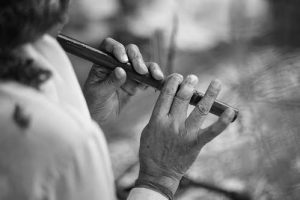 During the 1100s and 1200s, the flute was widely used in courtly music and saw use as a military signaling and marching tool. Swiss mercenaries helped popularize it in the 1300s.

During the Renaissance, it became fashionable for amateur flute players to practice and play together with what was known as “consort music” in cultured homes. The flute was an important part of these groupings. By 1600, plucked and bowed instruments were combined with flute in mixed consort music.

During this period, Italian and Netherlands flute makers experimented with the size of the flute’s bore, added an E flat tone hole and divided the flute into sections that made storage and travel easier. France’s Louis XIV was a big fan of the sound of this flute, as it was known as having a romantic, sweet tone.

The late 1600s and 1700s saw a solo flute repertoire emerge, giving players music that featured a range extended below the usual high register melodies. It also called for the player to add more individual character to each part. Composers like Vivaldi, Bach, Handel, Telemann and Blavet wrote extensively for the solo flute and professional players such as J.J. Quantz began to find success traveling from area to area performing concerts on the baroque flute.

Around 1750, London instrument makers took the baroque flute and added a system of flute keys, while also increasing the taper of its bore. The result was an even stronger lower register and more solid tuning. By the end of the century, the keyed flute was almost universally adopted. Every country had its own style of keyed flute and hosted visiting artists from other countries to show off their repertoire, instrument and skill. J.G. Tromlitz, a German flautist, was well known at the time as a virtuoso who performed on a keyed flute of his own personal design. 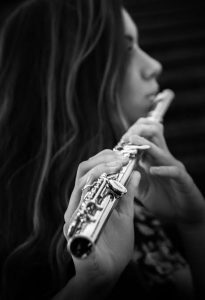 Over time the Vienna style of flute, with its conical bore and range down to G on the violin, became very popular. Its design was merged once again with the traditional keyed flute around the year 1850 to become an instrument known as the “Meyer” flute, which was quickly adopted across America and Europe.

However, 20 years later the superior technology of the Boehm style flute put it well on the way to becoming the preeminent instrument used by both professional and amateur musicians going forward.

Today’s flute is based on Boehm’s innovations, with modifications that vary somewhat depending on the instrument maker. One major change of note made since that time is a rescaling of the flute to A=440Hz during the 1960s by an English flute maker named Albert Cooper. This standard pitch is now the worldwide standard and the flute has adapted as well. 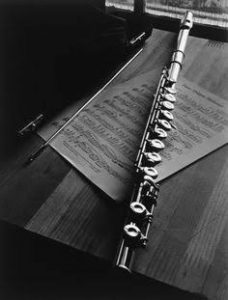 Famous Flute Players
The flute is primarily thought of as a classical and jazz instrument, but it has made some notable appearances in pop music as well.

Spread the love
by Sasha Tewari November 8, 2019 in Knowledge Base

Be the first to comment “Know Your Instruments: The Flute.” Cancel reply